Dylan isn’t the biggest fan of pasta, but the other night I made a new dish and he seemed to like it ok. I cubed some purple eggplant and salted it to get out the excess moisture (you rinse before you cook). Then I sauteed some garlic in some olive oil. I added the eggplant and some Italian seasonings. After letting it brown a little, I poured the eggplant in a casserole dish, added bread crumbs, sauce and some sliced mozzarella cheese. I baked it in the oven for a bit and then put it over some whole wheat spaghetti. It was pretty good for making up the recipe.

The other day I was washing dishes and straightening up my kitchen and Dylan was off somewhere playing. The next thing I know, he comes in the kitchen with my hair towel on his head. First, I am really impressed that he managed to get it to stay on his head, but since I usually shower at night and he doesn’t see me with it on, I have no idea how he knew it went on your head. I wish I could have gotten a better picture, he was so cute running around, all proud of his new hair towel. 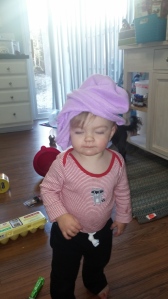 This last picture is Dylan very sad that his bowl of grits is empty. I had never made them for him before, but he loved them and ate two entire bowls full. I also made some pork ribs in the crockpot with BBQ sauce (and I hate my crockpot – it’s too hot and overcooks everything – I need to stop using it). He loved the pork too, but the grits were by far the winner. He was too impatient to try to spoon it in his mouth himself (something he is not good at yet) and he didn’t want to wait for me, so he just started grabbing handfuls and trying to eat it that way. Needless to say, there were grits EVERYWHERE.

It’s been a week since I posted, but unfortunately last Friday Dylan caught a stomach virus and he was sick most of the weekend. He very kindly shared the bug with me and I’ve been feeling off most of the week.

Some new habits that Dylan has picked up:

He is obsessed with climbing on everything. The only problem is that he has no idea how to get down and so I am constantly “rescuing” him. Its cute and annoying all at the same time.

I made an old favorite recipe: Weight Watchers Shepard’s Pie. I have made this recipe a bunch of times and it never fails to disappoint, it has a nice flavor. Sometimes I use ground turkey, sometimes ground beef. I’ve also used both chicken and beef broth. I usually use frozen mixed veggies in place of the fresh carrots though. And just make the potatoes with skim milk instead of the fat free sour cream.

The last update has to do with my house, its only been about 10 days since the last time I visited, but what a difference. Here is a view from the back, you can see the covered porch to the left.

Here are two views from the left and right. I can’t ever take a head on picture because the sun is always directly behind the house at the time I usually go.

I ran into the contractor on my way out and he said that next week they should have the house wrapped and the roof on. I will definitely take a picture then, but hopefully I won’t take that long to update on Dylan’s new antics.

Dylan has discovered that he likes trying to climb on the back of my tub, despite the fact that its sloped and slippery. He just falls and laughs and falls and laughs. Weirdest game I ever saw, but as long as he’s not cranky, I’m happy.

Running around naked after the bath is the best part. Today he discovered a new playhouse – the laundry hamper.

He’s got the worst cough at the moment. Hope he isn’t up all night coughing, poor guy.

Busy, busy, busy (plus a recipe and diaper review)

Things have been pretty busy around our household. I joined a local gym last week, so I have been trying to make it over there pretty often. Yay for childcare at the gym. Last Saturday, Dylan and I went to Amy’s house for the twin’s birthday party. On Sunday, we ran some errands, including taking pictures of my newly poured foundation (with plastic as it was very cold over the weekend):

On Sunday I also tried out a new recipe, Lentil Tacos (see recipe here). Dylan was not really a fan of lentils last night, no big surprise, but he did like the quesadilla I made him with the high protein tortilla and organic cheese. I didn’t have chili powder on hand, so I used a package of taco seasoning instead of the spices. I actually thought that the recipe turned out really well and was super tasty (as well as reasonably healthy and filling), but was also really, really messy. I am hoping that maybe they’ve firmed up some in the fridge overnight and will be less runny today. ETA – nope still runny, although Dylan actually ate them tonight.

Lastly, I bought a box of the (new?) Huggies Little Movers Slip-On diapers (see Amazon here). I bought them without reading reviews, but read the reviews on Amazon when I got home. Mainly people were complaining that it didn’t come up high enough in the back. This concerned me because I always feel like the front to back length is where Dylan’s diapers seem to run small. He’s been wearing them a couple days (including one giant poop) and we have had no leak issues. They do run a little short from front to back, although I don’t really notice unless he is bent over. I will say that I think they would be easier to put on if your kid knows to lift his legs to step into the diaper. I am hoping Dylan will catch on soon. But in the meantime, still so much better than trying to wrestle a wiggling toddler into the regular diapers. 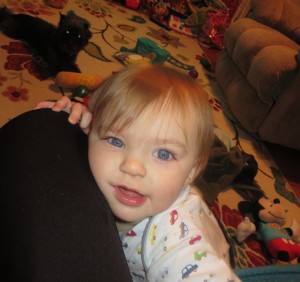 I bought new flannel sheets today and Dylan loved playing in my folded up down comforter while I was making the bed.

Next we tried to take some selfies… 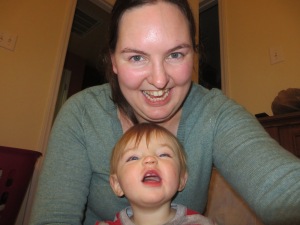 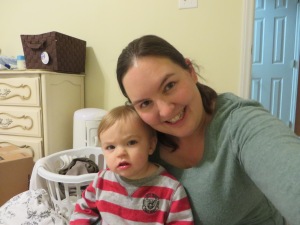 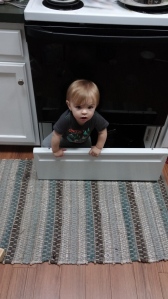 Dylan is into everything these days. See above for proof.

Today he also disappeared on me only to find him in my bathroom, with the door shut, sitting in the dark, eating toilet paper. Too bad I didn’t take a picture of that.